Head of AFL-CIO explains, “Why I Quit Trump’s Business Council”

On Tuesday, President Trump stood in the lobby of his tower on Fifth Avenue in Manhattan and again made excuses for bigotry and terrorism, effectively repudiating the remarks his staff wrote a day earlier in response to the white supremacist violence in Charlottesville, Va. I stood in that same lobby in January, fresh off a meeting with the new president-elect. Although I had endorsed Hillary Clinton for president, I was hopeful we could work together to bring some of his pro-worker campaign promises to fruition.

Unfortunately, with each passing day, it has become clear that President Trump has no intention of following through on his commitments to working people. More worrisome, his actions and rhetoric threaten to leave America worse off and more divided. It is for these reasons that I resigned yesterday from the president’s manufacturing council, which the president disbanded today after a string of resignations. 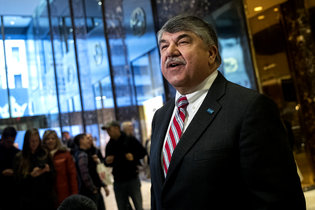 To be clear, the council never lived up to its potential for delivering policies that lift up working families. In fact, we were never called to a single official meeting, even though it comprised some of the world’s top business and labor leaders. The A.F.L.-C.I.O. joined to bring the voices of working people to the table and advocate the manufacturing initiatives our country desperately needs. But the only thing the council ever manufactured was letterhead. In the end, it was just another broken promise.

During my January meeting with President Trump, we identified a few important areas where compromise seemed possible. On manufacturing, infrastructure and especially trade, we were generally in agreement. Mr. Trump spoke of $1 trillion to rebuild our schools, roads and bridges. He challenged companies to keep jobs in the United States. He promoted “Buy America.” He promised to renegotiate the North American Free Trade Agreement.

Here’s the thing: Working men and women have been promised the moon by politicians. Year after year. Campaign after campaign. Republican and Democrat. Too often, those promises have ended up being hollow; election year sound bites are often discarded as quickly as they are made. I told President Trump that this time must be different. I made clear that we would judge his administration on its actions.

Nearly seven months in, the facts speak for themselves.

President Trump’s $1 trillion infrastructure bill is nowhere to be found. And according to an analysis from the University of Pennsylvania, even if Mr. Trump did bring such a plan forward, his own budget proposal would wipe it out, leading to a net loss of $55 billion for highways, water facilities and public transit. President Trump has also remained silent on the future of the Davis-Bacon Act of 1931, which requires contractors on federally assisted construction projects to pay their employees at rates prevailing in the communities where they perform the work.

What about Nafta? First, President Trump promised that the United States would withdraw. Then his administration sent a letter to Congress indicating the treaty needed only minor tweaks. Now renegotiation is underway with no clear principles for reform or negotiating goals in sight. Meanwhile, Nafta remains firmly in place.

Although President Trump has promised to protect the social safety net, his budget would slash $1.5 trillion from Medicaid, $59 billion from Medicare and up to $64 billion from Social Security over 10 years. It would strip funding for workplace safety research by 40 percent, even though about 150 workers die each day from hazardous working conditions. And it would force the people who make our government work to endure a 6 percent pay cut.

President Trump championed the Republican plan to gut health care and raise taxes on working people to line the pockets of the rich. And his executive orders that deport aspiring Americans and impose a religious litmus test for refugees are both morally bankrupt and bad economic policy.

Finally, rather than “draining the swamp,” President Trump has filled his cabinet with the authors and beneficiaries of our broken economic rules. He has elevated an anti-worker judge to the Supreme Court and appointed union-busting lawyers to the National Labor Relations Board.

His response to the white supremacist violence in Charlottesville was the last straw. We in the labor community refuse to normalize bigotry and hatred. And we cannot in good conscience extend a hand of cooperation to those who condone it.

In some ways, President Trump presented himself as a different kind of politician, someone who could cut through the gridlock in Washington and win a better deal for American workers. But his record is a combination of broken promises, outright attacks and dangerous, divisive rhetoric. That’s why we opposed him in the campaign. And that’s why he is losing the support of our members each and every day.

Strike by U.C. Academic Workers Continues Into a Second Week