The nonpartisan Congressional Budget Office estimates that the longest-running government shutdown in U.S. history came at a price. It cost the economy $11 billion, with $3 billion that will never be recovered, according to a report released Monday.

For the fourth quarter of 2018, the CBO estimated real gross domestic product was reduced by $3 billion compared to what it would have been. The level of real GDP for the first quarter of 2019 is estimated to be $8 billion lower, due to a combination of the partial government shutdown delaying approximately $18 billion in federal spending, suspending services for federal workers and a reduction in demand lowering output in the private sector.

“Risks to the economy were becoming increasingly significant as the shutdown continued,” the report read. “Although their precise effects on economic output are uncertain, the negative effects of such factors would have become increasingly important if the partial shutdown had extended beyond five weeks.”

While CBO anticipates a majority of the lost real GDP will be recovered, about $3 billion will not be. That’s about 0.02 percent of the projected annual GDP in 2019, according to the report.

On the second day of the year, Danielle Miller gave up on the federal government.

Furloughed from her Internal Revenue Service job near Cincinnati and fearful of running out of money during the partial government shutdown, she filed for unemployment benefits: $414 a week, about $200 less than usual.

“Once Christmas came and went, after New Year’s, I was like, I can’t go on,” said Ms. Miller, a single mother who has worked for the I.R.S. for almost 14 years. She spent part of this week calculating when her first unemployment check would arrive. “It’s disappointing, and it’s frustrating,” she said. “I have a job.”

The shutdown, the longest on record, is prompting tens of thousands of federal employees to seek jobless benefits. As the impasse meanders through its fourth week and more bills come due, their numbers have been growing.

On Thursday, two days after the White House doubled its projections and warned that the shutdown was reducing quarterly economic growth by 0.13 percentage points per week, the Labor Department reported 10,454 initial claims by federal workers for the week that ended Jan. 5, doubling the previous week’s figure. Thousands more have applied since, state officials said. 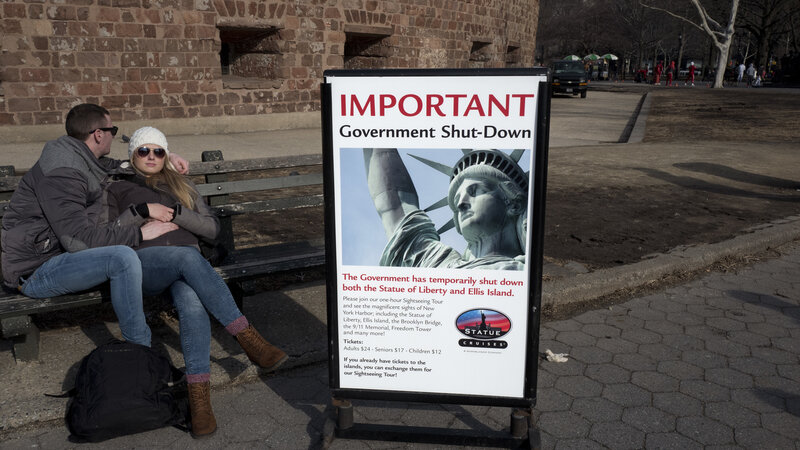 The government shutdown that ended this week will cost the United States economy several billion dollars, according to estimates by economic research firms.

But the affiliated damage — like the undermining of consumer and business confidence — will be far greater, economists said, especially combined with the financial effects of the near-breach of the country’s statutory debt ceiling.

It might take months for the Obama administration to come up with a thorough accounting of the direct cost to the taxpayers of putting much of the government out of business and then reopening it. Several offices, including the National Aeronautics and Space Administration and the National Institutes of Health, said they were in the process of gauging the disruptions.

“The three weeks of government shutdown will cost the economy $3.1 billion in gross domestic product from lost government services,” estimated Paul Edelstein and Doug Handler of IHS Global Insight, an economic research firm. “There will also be some impact from lost private-sector jobs tied to the shutdown, as well as a loss of consumer and business confidence resulting from the debt-ceiling showdown.”

Mr. Edelstein and Mr. Handler added that the shutdown had delayed the data necessary to evaluate the shutdown: “The exact impact on the rest of the economy will be hard to measure until delayed economic data are released.”

Watch an online video explaining what the shutdown will cost the economy.