In tweet, Nixon Library clarifies that Comey’s firing was, in fact, much worse than “Tricky Dick”

Yesterday’s abrupt dismissal of FBI Director James Comey by President Donald Trump has understandably raised comparisons between Trump’s actions and those of former President Richard “Tricky Dick” Nixon, who tried to force his attorney general to fire the special prosecutor who had been appointed to investigate the White House’s role in the Watergate scandal.

Here is an article that places the comparison in historical context, after the Richard Nixon Presidential Library trolled President Trump and cast light on the comparison. Spoiler alert: Trump comes out looking worse than Nixon, which is not an easy accomplishment.

On Tuesday, after the news of Comey’s firing broke, the Nixon Library tweeted from its official account “FUN FACT: President Nixon never fired the Director of the FBI #FBIDirector #notNixonian.” 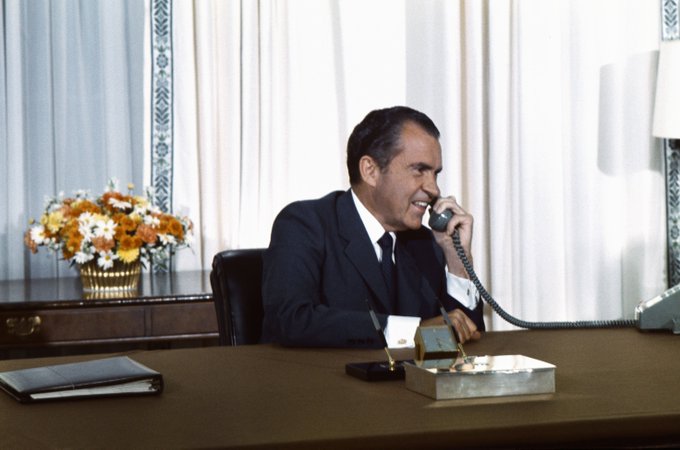 Cox was fired on Oct. 20, 1973, after the special prosecutor attempted to subpoena the president, seeking tapes of conversations recorded in the Oval Office. Nixon refused, and asked Atty. Gen. Elliot Richardson to fire Cox.

Richardson declined to fire Cox, and resigned. William Ruckelshaus, the deputy attorney general, also refused to dismiss Cox, and also resigned. Cox was then fired by Robert Bork, the solicitor general at the time.

The Nixon Library, using the hashtag #SaturdayNightMassacre, reiterated on Twitter that Richardson and Ruckelshaus resigned, and were not fired.

At the New Yorker, Jeffrey Frank tried to explain how Comey’s firing both is and isn’t like the Saturday Night Massacre. Frank quoted John Dean, Nixon’s White House counsel and a witness for the prosecution in the Watergate hearings, as saying, “If they think they can influence the Russian investigation by removing Comey, they are naïve. I learned from my own experience that you can’t put in the fix by removing somebody.”